A brand new sailing boat from Hanse in 46 feet

The new Hanse 460 sailboat has new designers and it paid off. With new French blood in German DNA, the Hanse 460 has been given a boost, winning over the European Yacht of the Year jury with its looks, comfort and, above all, comfortable sailing.

For many, many years, the large volume brand Hanse has been working with the equally German design firm judel/vrolijk & co in Bremerhaven, which has lined up successful models of cruising-class sailing boats for the Greifswald shipyard in the former East Germany. There, Hanse builds sailing boats side by side with group cousins such as Dehler, Moody and Sealine, in a modern state-of-the-art production facility. However, when the new 46-footer was to be developed, the Hanseatic League wanted to add a splash of fresh thinking, so they put out a design tender that resulted in the contract being awarded to – get this – French Berret-Racoupeau. Since its inception in 1983, Jean Berret and Olivier Racoupeau, based in La Rochelle on the Bay of Biscay, have been supplying new products to the region’s major French yacht builders, as well as designing everything from superyachts with sails or engines to smaller passenger ferries and fishing boats. To be able to add German Hanse Yachts to the list of achievements is of course a feather in our cap.

For the Hanse 460, the new design collaboration means that the relationship with existing Hanse models is not as obvious as it would have been if the company had continued as before. Berret-Racoupeau has simply injected an injection of French frivolity into Hanse’s strict German DNA. From the slightly forward sloping stem and a foredeck with sharp blows that contribute to the interior volume of the foredeck and to better eject spray from the boat, to a width that follows the deck height all the way aft. There, the freeboards then turn in sharply towards the waterline, to reduce the wet surface when the boat is heeled over on a tack or accelerating away on a downwind. But while the Hanse 460 has many of the attributes and looks of a racer, it is still primarily a comfortable family cruiser. Nor has the incident of hull windows coming loose at sea deterred the yard from fitting new 460s on each side with as many as four larger panes in line along the freeboards, adding to the exterior character and of course providing both views and light flow in the saloon and cabins.

Many options a this new sailboat – Hanse 460

Going below deck, I note that the companionway hatch can be pushed all the way down into the sill, to get completely out of the way when not closed, a solution first seen on the yard’s Dehler boats. A wonderfully light and airy interior then opens up, with light French oak woodwork and classically striped worktops, at an extra cost of 75,000 and 27,500 kroner respectively over the standard level’s matt mahogany and acacia doors. Combined with the addition of skylights and longitudinal windows in the superstructure, the feeling of a basement has been blown away. The white ceiling panels with both LED loops and separate lamps also contribute to this impression.

Aft of the starboard side’s longitudinal galley, the standard layout includes a small cabin for a washing machine and tool bench, before the aft cabin takes over. Instead, the test boat has been upgraded for SEK 65,000 with a large navigation table for paper maps or desk work, but this also includes an extra toilet with shower, which is not separate. This also makes the galley slightly shorter, but since it extends all the way to the main bulkhead, it is still more than enough. There is both workspace and storage in the class of a home kitchen, a two-tier stove with oven and of course the possibility of both fridge and freezer through a hatch in the bench or in a practical pull-out drawer. The straight saloon settee on the port side follows the hull side and ends aft with a small divan. The sofa backrests can be folded forward to reveal both the bar cabinet and drink table with stainless steel sockets to keep glasses steady. Elegant, certainly, but perhaps a little impractical if the drink splashes out onto the sleek dark-grey velvet cushion.

Already in the basic version, the Hanse 460 has two generous toilets with a separate shower behind a stylish glass door, but the number can be increased to four in the charter version; one in each of the four cabins with double berths that are then offered. If you want even more beds, you can even ditch the hub table and the associated toilet in favour of a cabin with a bunk bed and get ten comfortable beds, which is not bad at all for the size of the boat. The forepeak can be divided into two separate cabins with a double bed or bunk bed in each, but in the test boat’s layout we instead find a grandiose and inviting raised double bed in the forepeak. However, if you want the test boat’s sofa instead of a wardrobe on the starboard side, it costs SEK 11 700 extra. Under the bed in the forepeak, there is plenty of space for the fresh water tank and bow thruster with batteries, as well as pull-out drawers for personal belongings. The water heater, on the other hand, is cleverly positioned under the mud flaps just in front of the companionway.

A cockpit in the class of a 50-footer

Up in the cockpit, the dozen or so people covered by CE approval (Area A, unlimited ocean sailing) can share their meals at not one but two optional electrically raised and lowered tables costing SEK 72,000, with passage in between. With the comfy moulded cushions in place, the settees feel more like comfortable sofas, with reclining backrests that provide extra height over the side sills. In addition to the plotter and instruments, both steering pedestals are also equipped with engine controls, so that the boat can be manoeuvred into harbours from any side. The helmsman’s seats behind the steering wheels cost an extra 35,000 crowns and can be folded up completely on sturdy gas springs, for a completely open passage to the bathing platform. It is available for an additional charge with electric adjustment and an extra comfortable bathing ladder, but also works well in the standard version.

For a family cruising class sailing boat like the Hanse 460, it is a great advantage and extra safety not to have a big sheet sweeping through the cockpit in the staysail turns, and it is therefore arranged via two strong blocks in the deckhouse roof in front of the companionway hatch. The solution is in the simplest terms to be able to trim the sails effectively for racing, but works well enough for lazy holiday sailing. Along with all halyards and trim tabs, the bulkhead is led first through the mast foot block and then aft through recesses in the superstructure roof and the cockpit saddles. This way they can be handled smoothly by the helmsman at the steering pedestals. The glove is pulled to the rocker anchored all the way out the hull sides for comfortable passage along the gunwale to the foredeck, where the boat is prepared with a self-tailing jib rail on top of the masthead. In the bow, just aft of the anchor locker, there is a large and deep stowage area, with plenty of room for fenders, sails and mooring gear. The neatly integrated point for an extra SEK 20,000 accommodates both an extra forestay for SEK 87,800 and an anchor cover.

The extra forestay is a blessing when sailing the boat in light winds in Spanish Mediterranean waters off Port Ginesta, just southwest of Barcelona, as it allows us to smoothly unfurl the Code sail already attached to it. The omen of having to furl into the staysail turns to allow the sail to pass the regular forestay is one we gladly take when the big sail gives so much extra boost to the boat, which quickly pushes comfortable speed through the waves at almost a crosswind angle. However, today’s top speed of 12.1 knots will come later, in a light breeze, when the wind has increased to around ten metres per second. However, the average over time is closer to ten knots, which is not bad either. Combined with the controlled rudder feel, with just the right amount of feedback to make fingertips rather than a firm grip on the wheel, the Hanse 460 is a pleasure to sail. When I go through the comments of my fellow jurors, it is also the fine sailing qualities that many people have taken a liking to, and which were decisive when we selected this particular boat as the European Yacht of the Year 2022 in the family class in fierce competition.

With 160 sailing boats already sold on the drawings, Hanse Shipyard’s move to bring in French Berret-Racoupeau as designers for the yard’s new 460 has proved to be a lucky one. The yacht was also named European Yacht of the Year 2022 in the family class.

For more information about Hanse 460 click on the link 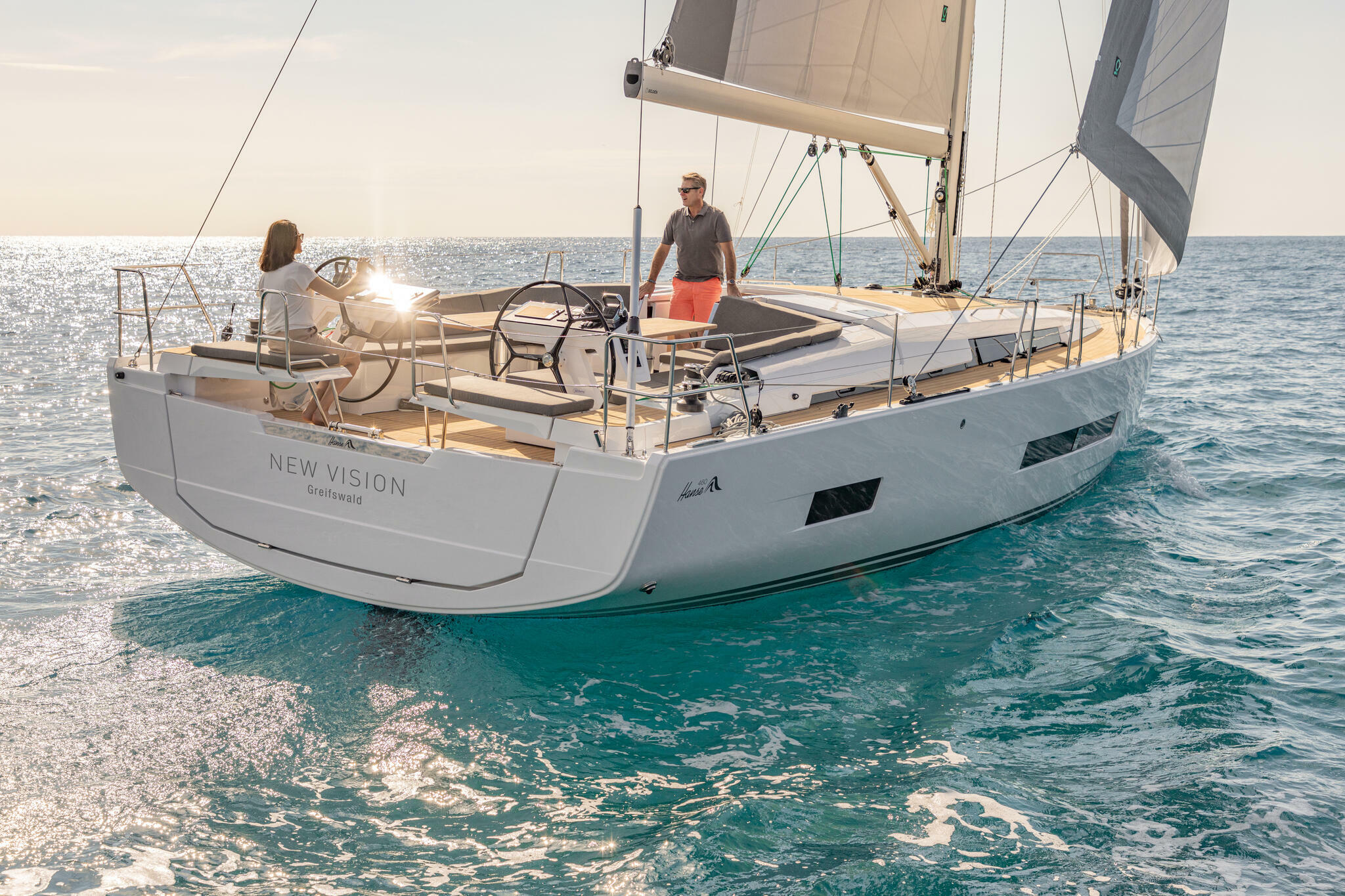 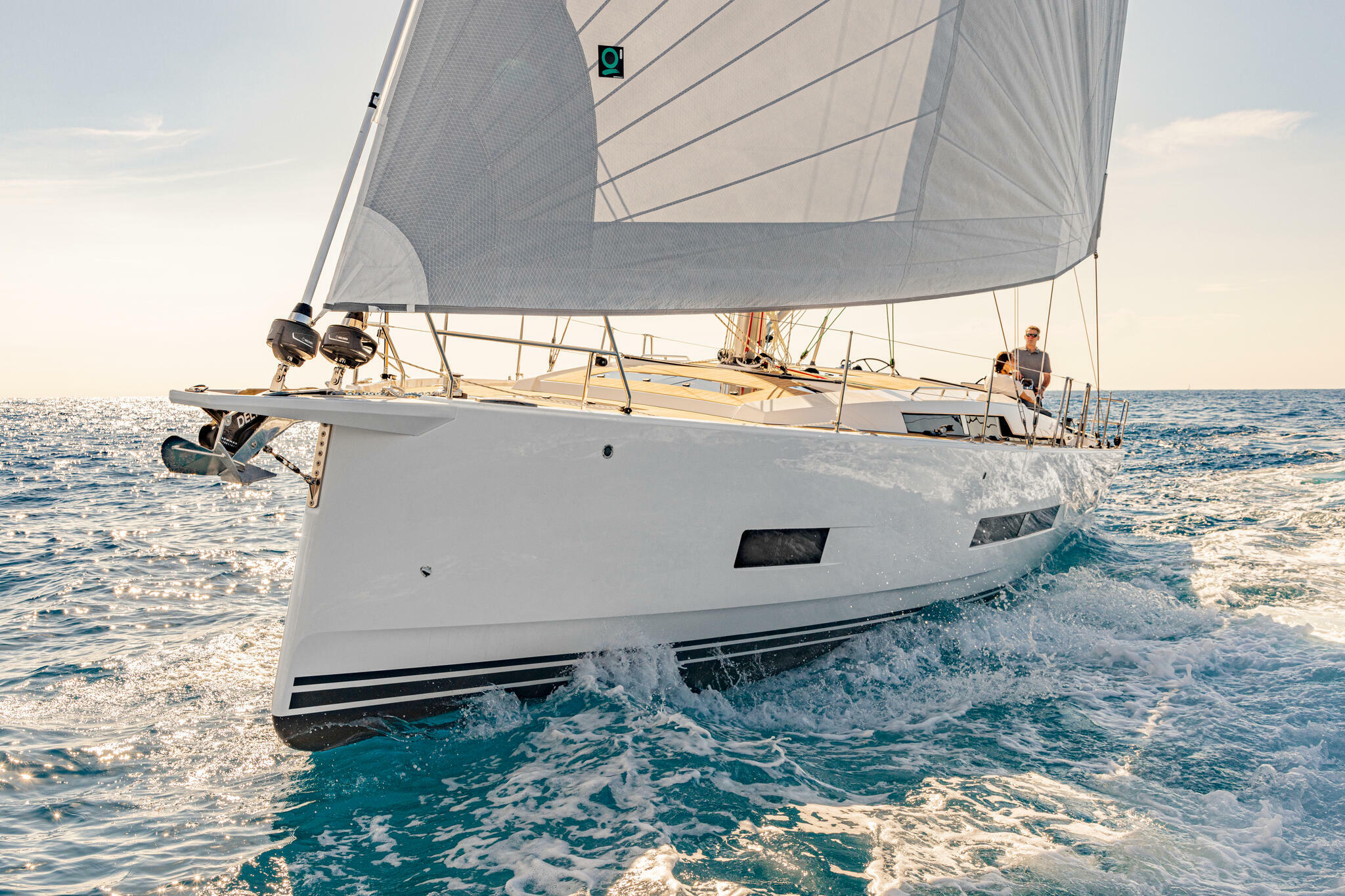 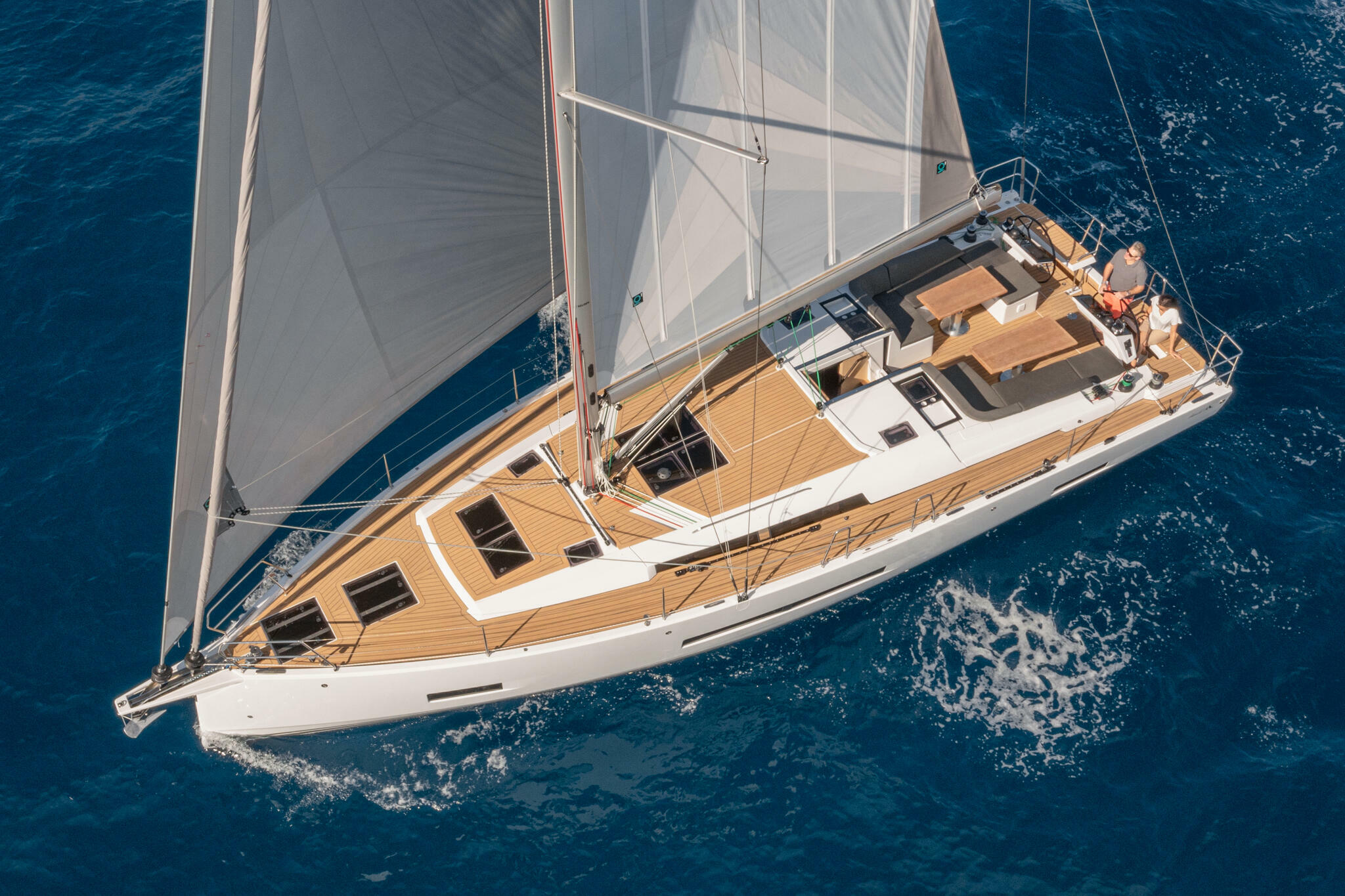 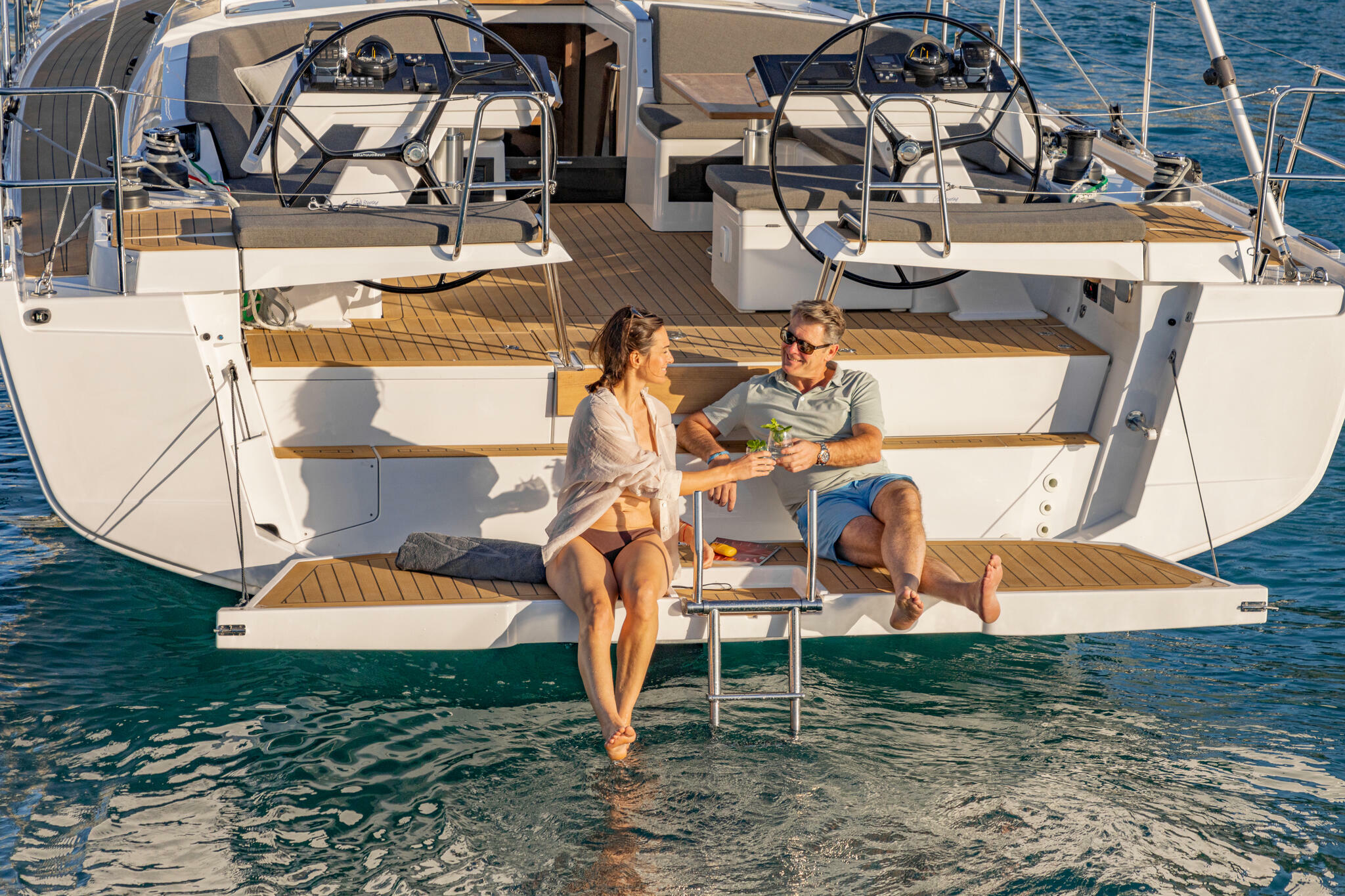 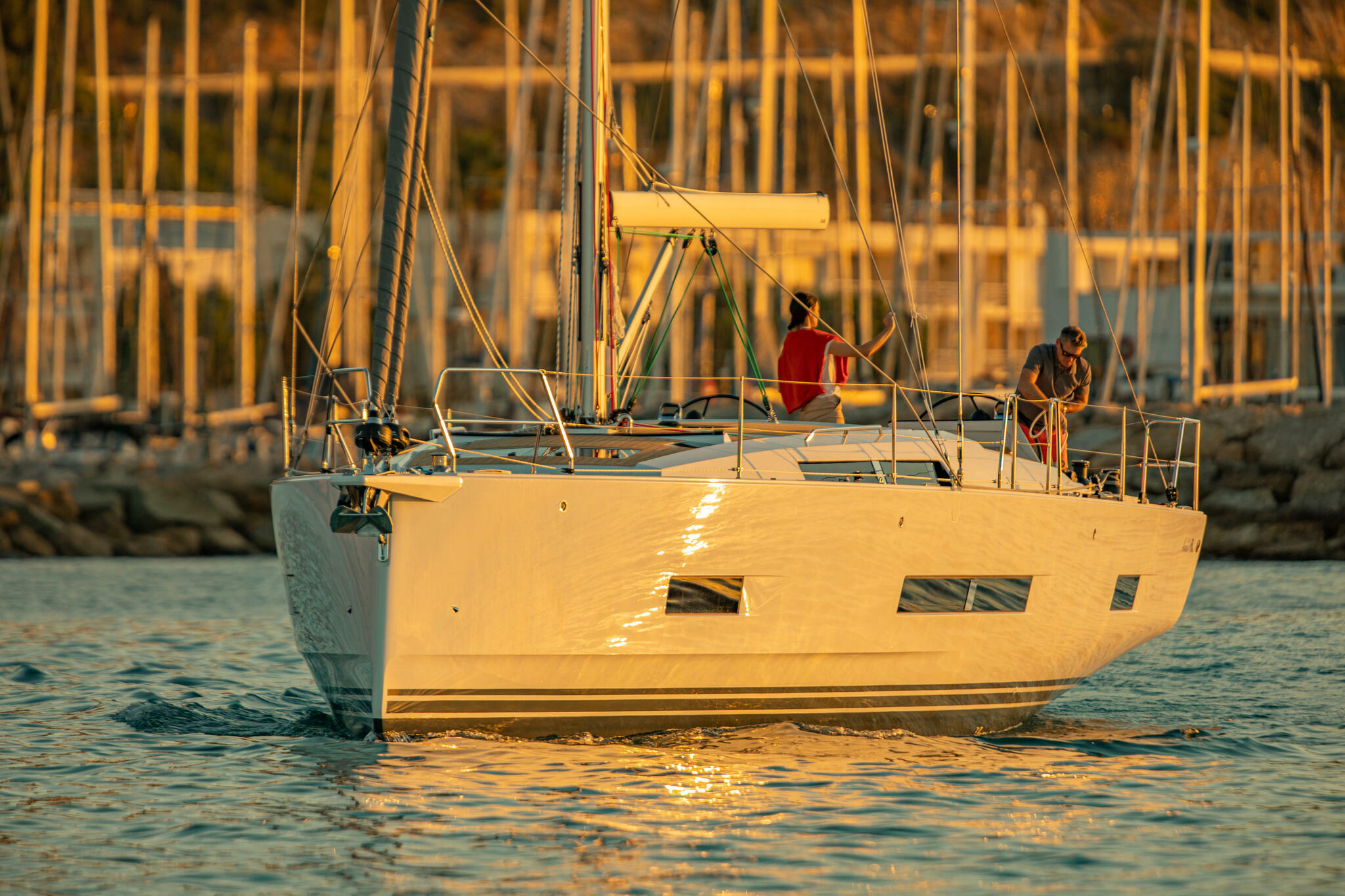 For more information about Hanse 460 click on the link

CE-approved in class A for 12 persons

+ Possibility to have five separate cabins

+ Many options to choose from

Three competitors with sailing boats of the same size:

The German shipyard turned to Italian Maurizio Cossutti for the design of its C45, who designed a sailing boat with the capacity to accommodate up to five cabins. In addition, there is room for an aft storage area and a spacious cockpit with all trim lines down.

The 46-footer in the Oceanis line is available with roller mast and self-tacking jib to simplify sail handling on lazy holiday days. Pascal Conq has given the sailboat a wide and sturdy stern with a lot of volume even in the bow, thanks to sharp blows in the freeboards.

Italian Umberto Felci has designed French Dufour’s new 47-footer, which is sold in three versions. The performance-oriented one has the large splash guard on the cockpit sink while the other two have it on the roof of the cockpit. Inside you can choose three or four